The Shaolin Neijin Qigong or Shaolin Neijin Yizhichan originates in the meditation practice of the northern Shaolin Monastery and is dated about 500 years after Christ. Later on the method was preserved and further developed in the southern Shaolin Monastery. It had been introduced to a broader public for the first time by Great-Grandmaster Ashui Que, who had left the Monastery in 1945. After him Grandmaster Jinsheng Yao contributed intensively to a further spreading as the bearer of the knowledge in the 19th generation. He finally gave the responsible task to spread the Shaolin Neijin Qigong in the western world to the single authorised representative of the direct Master line Grandmaster Buyin Zheng.

Being a crucial, meditative part of Chan Buddhism, the Shaolin Neijin Qigong belongs to those authentic Qigong systems which were traditionally and purely handed-down. It shows all the verifiable aspects like a clear Master line, a stepwise level of training and level of abilities and the training of body and mind.

The various potentials of the method clearly reflect in the name:
Shaolin describes the origin of the method;
Neijin represents inner strength, the potential and the energy of body and mind;
Yizhi literally means “one finger”, in connection with the method however it especially refers to special exercises which are performed with the fingers for example in order to transfer energy;
Chan indicates a special form of Buddhism and among other things a deep meditation which aims to develop compassion and to arise wisdom.

The most important exercises

The riding stance
A central importance in Shaolin Neijin Qigong has the so called riding stance. The practitioner meditates, ideally on a daily basis, for a longer period of time in an exact, predefined position, similar to the sitting position of a rider. This position calms the mind, opens the Meridians to a great extent and creates a free flow of Qi. It is important to only practice this exercise according to preparation and precise instruction. One starts practising over a shorter period of time and increases the duration to 35 minutes, if possible. Experienced practitioners enjoy the effects of this standing-meditation for a period of one hour or more.

Standing figures
Besides the riding stance further clearly instructed standing figures are being practiced in Shaolin Neijin Qigong on a more advanced level, like for example the “Tiger” and the “Dragon”. Visiting Chinese Monasteries, one may find imageries of saints, the so called Louhans, which show such positions. Without any special concentration or mental imagination those defined body positions guide the flow of Qi in a way so that naturally blockades dissolve. 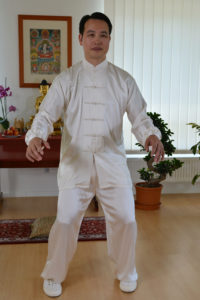 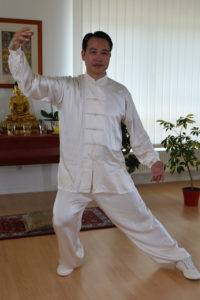 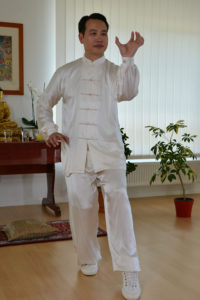 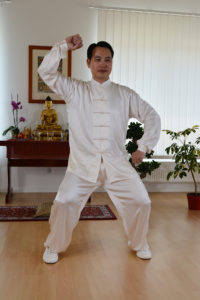 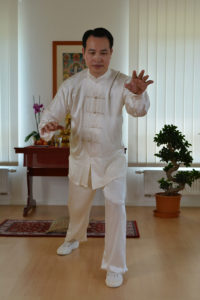 Exercises in sitting and in lying 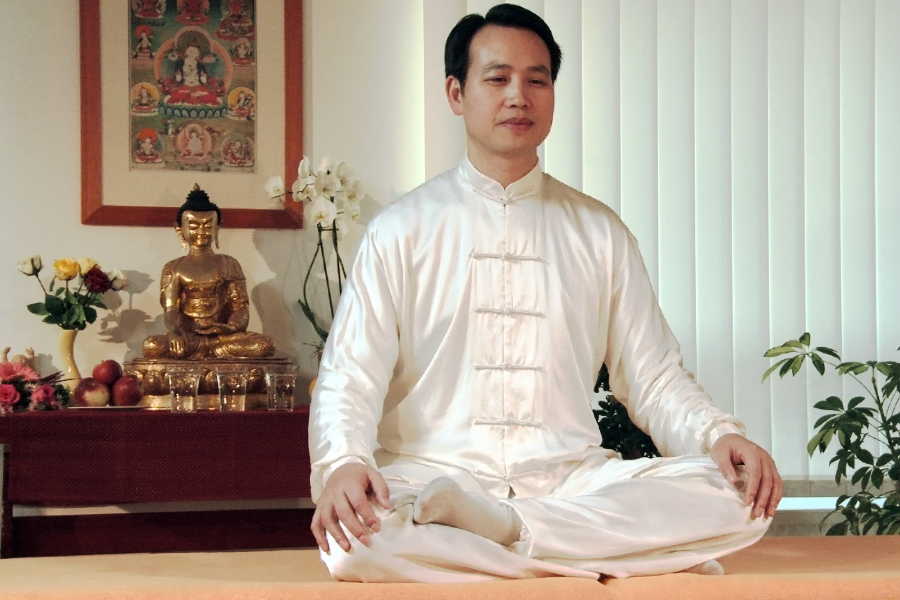 The energy transfer of Shaolin Neijin Qigong
For one the energy transfer of Shaolin Neijin Qigong opens the effective possibility to transfer healing impulses on the patient and to release energy blockades. If being used by experienced and qualified peoples it is also able to give access to universal knowledge and hidden abilities. The receiver may for example perform Gongfu movements, which he or she did not know previously. Because of its strong potential the energy transfer is only applied by Qigong practitioners who are responsible, moral and authorized.

Aptitude for Shaolin Neijin Qigong
In principle the Shaolin Neijin Qigong exercises are suitable for everybody, for they can be adjusted to the individual state of health. Thus also disabled or seriously sick people can practise special exercises to find a healing energy access. Younger as well as older people profit from the harmonizing exercises, which already after a short period of time lead to a distinctly increased well-being, a better concentration, resilience and balance.